I got a real treat this year for Christmas. Actually, me and Sara both. My sister sent Sara a “no stuffing” dog toy! Every mother’s dream! Sara doesn’t like it any less either, which surprises me, ’cause usually once the stuffing’s ripped out she loses interest and I’m left to clean up the mess. And so I have to share my dog toys story from a couple of years ago, before they made this great advancement. 🙂 I hope you enjoy it:

I am the happy owner of two puppies. First came a chocolate on caramel cocker, heavy headed, stubborn, yet affectionate boy with big lion’s feet, an overall teddy bear appearance. Then came a terrier mix, a little girl with a comical face and bristly hair. Lots of fun is had by all, the puppies learning and exploring and playing. I’ve had dogs before so I know to expect the occasional accident, muddy floors, and water dribbled everywhere. I no longer cringe from bent houseplants, broken lamps, and frayed slippers. There is one phenomenon, however, that I will never figure out – dog toys.

Christmas time with new puppies is a great time and we were showered with lots of new dogs toys, the first of which was a rubber chicken. I could see the humor in this, sort of, until one of the pups started squeaking the goofy-looking thing. The squeaker was in an unmentionable place. It had a panicked look on its face, which I can understand. If I was manufactured for the sole purpose of being chewed on I’d be panicky too. The irritating squeaker was finally chewed out after about a week, and the chicken seemed much more innocuous. Sadly, the chicken was rather thin skinned and was soon dismembered with pieces left all over the house. The feet continued to entertain the terrier, being just the right size to chew on like a long-lasting piece of gum.

We also received a few stuffed toys. It’s interesting to me that fabric toys are sewn and stuffed so poorly that, after the squeaker is located and ripped out, the floor becomes cushioned with puffs of polyester stuffing and the deflated toy is used for tug of war until only threads are left, which doesn’t take long. Hello??!!! These toys are made for dogs – could we sew them a little better please?

I’m also amazed with the colors that dog toys come in. Dogs see limited colors, in fact, no reds or greens. So why do dog toys come in every screaming color of the rainbow, including odd combinations like fuscia and turquoise or Christmas colors of red and green? If toy makers want dog owners to buy them, knowing full well they’ll be scattered everywhere in the house, most heavily in the room most likely to entertain company, why don’t they make them in colors a dog mom can appreciate – a nice floral perhaps, a soft brown to match the carpet? Would dogs like them less if they came in a blue toile?

When I reported the demise of the rubber chicken to its sender, that kind person then delivered a….well, they thought it was a goose, I thought it looked like a scared vulture with long pink eyelashes but now have decided it was a flamingo. It was flesh-tone rubber, molded with a skirted white swim suit and ballet slippers. Who thinks of these things? I could see some entertainment value in this – maybe. Of course the squeaker was in the poor creature’s derriere, the first place the dog chews. Now I ask you, for whose benefit is this? This toy, too, had an alarmed look in its face, and if it hadn’t come with that expression it would have acquired it after it was drug around by its butt for days until the squeaker finally tore out, leaving a gaping whole in the back of her swimsuit. Before long I find the poor dear with that hysterical look on her face staring at her legs laying across the room.

When escorting new dogs outside during the middle of the night I’ve stepped on blue fuzzy snakes, walked around a glow in-the-dark frog that lost its legs during snack time, and tried hard to avoid a spikey orange football. What a minute, glow in the dark frog? If the spikey football glowed in the dark it would sure save my feet.

I spend a lot of time in the yard with two dogs – cleaning up, cleaning up, and then cleaning up. I retrieve inside toys that somehow got outside – they’re easy to spot with their bright colors. I fill and rake smooth freshly dug holes and replant sprouting bulbs. As I’m picking up red and purple remains of a plastic toy, I find the chicken head peaking out of the shrubs, that hopeless look on it’s face. 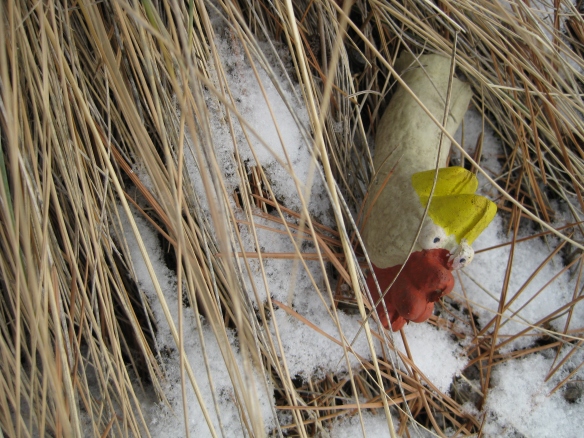 I know exactly how it feels.