Having made my resolutions for the year at Thanksgiving, regarding health and better eating habits, I can now use the New Year to focus on an attitude adjustment. Always room for improvement. Calvin and Hobbes are my all-time favorite cartoon characters. Sometimes they are profound, sometimes provocative, always hilarious. Sometimes I get my insight and inspiration from them. 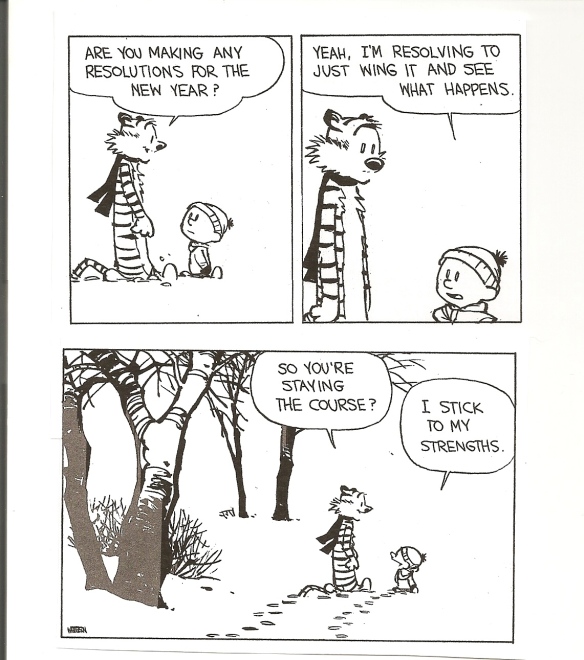 One of Calvin’s lessons to me is to be a better observer. He pays attention to the world, to the woods where he plays, and to what Hobbes has to say. I resolve this year, again, to be more observant, more appreciative, more present. Life is hard, so it’s important to be aware of any and every instance of pleasure. Things like the ice encrusted faces of my dogs after they’ve been wrestling around out in the yard, squirrel tracks in the snow by the woodpile, and perfectly formed snowflakes when the temperature is just right – if you get real close it’s like a magic show!

I’m also going to work at seeing things from every angle. What may initially seem like a problem or a stumbling block may be that cloud with the silver lining, or there may be an opportunity hiding itself in there. A bit cliché? Maybe. Do they still work? They might if I let them. And if not at least I can say I tried. When the old platitudes don’t suffice I take the kids out for a walk and pay attention. I wouldn’t want to miss ice crystals in the air on a brisk sunny day, or the pine cone crumbs from the Northern Flicker that just flew off, or any other of the bits and pieces of joy I could miss if I get bogged down in pointless worry and negativity.

There’s a wonderful line from the movie Joe Versus the Volcano. Meg Ryan’s character says “…almost the whole world is asleep. Everybody you know. Everybody you see. Everybody you talk to… only a few people are awake and they live in a state of constant total amazement. ” I want to be one of those people!!! My one and only resolution for 2013! 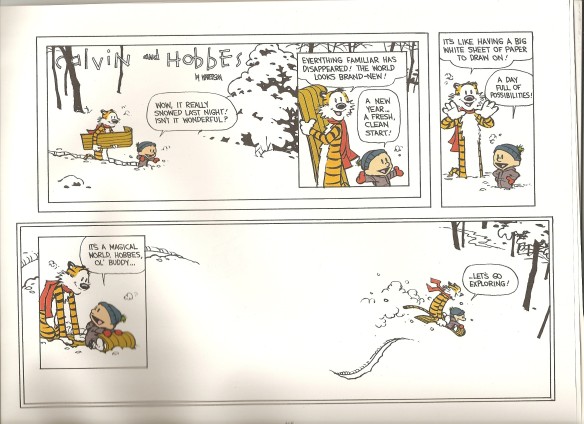