My bucket list was completed a year and a half ago when I visited Vermont and took a fall bike ride that included pedaling through a covered bridge. Life can be so good! Since then, though, I’ve been remembering other things that I’ve “always wanted to do,” and have a new list, a secondary bucket list. Something will happen or someone will mention something on their bucket list and it jogs a memory. My friend Phyllis always wanted to horseback ride on a beach, and she got to do that, and, hey, I’ve always thought that would be awesome, so now that’s on my new list. This week someone mentioned ice skating on a pond.

I’m privileged to live in a forested community with a little lake, six acres I think it is, and it usually freezes solid in the winter time. Why I’ve never thought of skating on it I don’t know, and have never seen anyone else skating on it. I did skate, or try to skate, on a frozen creek about fifteen years ago but the trying didn’t last more than fifteen minutes or so. Water doesn’t freeze smooth and pretty liked groomed rinks, it’s bumpy and lumpy and full of frozen leaves and sticks and scary-looking cracks. There were kids playing hockey on the creek and they made it look so easy, but it shattered an illusion that skating outside in the winter would be so much fun. But I’m willing to try again. Like horseback riding on a beach, outdoor skating has always been appealing. The “bucket list” part is to do it gracefully 🙂 I went over yesterday and tried to sweep an open spot to skate in and discovered that was way too much work. I was going to take a shovel today and clear some more but then decided to just try skating on snow-covered ice. Turns out that works just fine, if you can call what I was doing skating. It was a fun test, though. It didn’t seem as rough as the creek and I think the snow made it a little less slick, so good for a beginner. I only fell down once but that was from Cooper being in the way; I guess he thought he was helping. The weather was cooperative, too. Not too cold, no wind. The best part of the experiment was running into a neighbor who was out with her dog and, it turns out, is interested in brushing up her skating skills (and the fact that she’s also interested in skiing and snowshoeing is an added bonus). So we’ve got a deal. We’ll practice together and be as graceful as skating ballerinas by the end of the season. I can’t wait to get started! I’ll keep you posted about when I can mark one more thing off my list! Life can be so good! 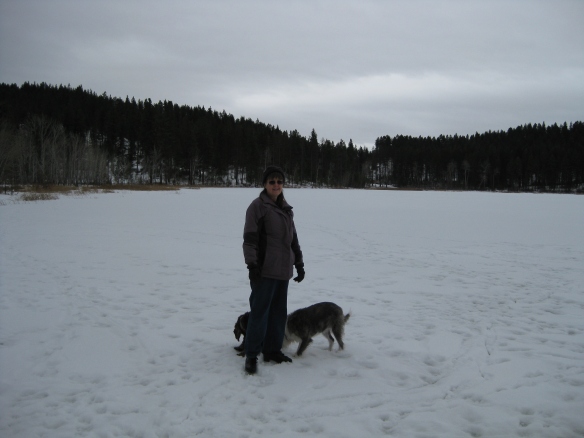 5 thoughts on “Making the Most of a Cold Thing”